The 2004 Autumn-Winter Collection is the 1st card collection of the Japanese version of Love and Berry. It was released in October 30, 2004, and is the Japanese counterpart of the eventually released Version 1 in the international version.

This introduces the first four types of cards:

There are 18 Hair & Makeup Cards, 36 Dress Up Cards, 18 Footwear Cards and 4 Special Item Cards. In total, there are 76 cards in this collection.

The 2004 Autumn-Winter Collection card design has the barcode taking up almost the entire side (left on the front, right at the back) of the card at both sides.

The back of the card features Berry and Love facing front. Love is wearing Fitted Tee Girl and Pastel Love Sneakers while Berry is wearing Baby Black Tee and Starry Diva Boots. The top left has the 2004-2005 Oshare Majo Love and Berry logo, while the background is mostly white, with an amount of pink splashed onto the center. There is also an amount of pink on the left side. Below the logo reads "Copyright SEGA, 2004."

This collection uses the normal circle sparkle gloss used for many collections to come. It uses a simple border, which color depends on the card's type. The following possible colors are:

Within the border is the a pink heart containing the card type's initial, the barcode, which background is pink, the card's type and number, the card's transliterated English name, and a logo saying "Osharemajo Love & Berry."

The background within the border is white, with some pink splashed into it (similar to the card back's background). Above the card image is the card's kanji name in red, and the card's lucky colors with the colors being within circles.

The card's image is in the middle. At the bottom most, near the end of the border, is the card's description. 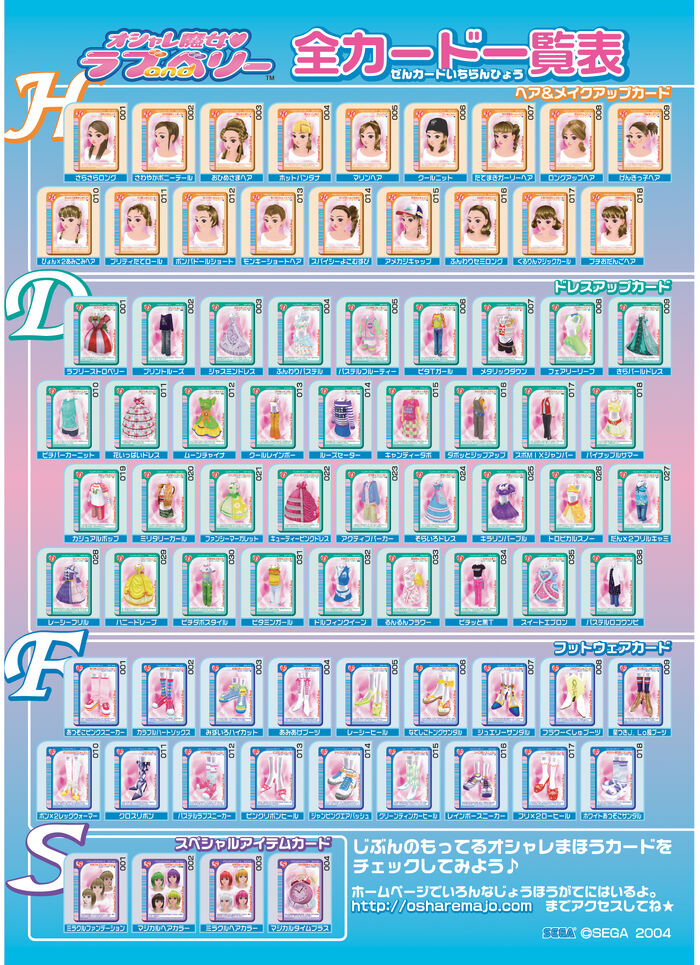 Retrieved from "https://loveandberry.fandom.com/wiki/2004_Autumn-Winter_Collection?oldid=14164"
Community content is available under CC-BY-SA unless otherwise noted.