The 2005 Autumn Collection is the 3rd card collection of the Japanese version of Love and Berry. It was announced in October 12th 2005 along with 2005 Winter Collection and was released in 10th November 2005. It is the Japanese counterpart of the eventually released Version 3 and Version 4 in the international version. It is where Disco was first added as one of the six main stages from now on.

New cards were once again introduced. Resulting in 4 Hair & Makeup Cards, 18 Dress Up Cards, 7 Footwear Cards and 1 Special Item Card added into the main roster. In total, there are 106 cards in this collection, with 12 Dress Up Cards being removed.

The card design has been entirely revamped with barcode remaining at the same place.

The back of the card features Love wearing Feminine B-Girl and Cool Star Socks and Berry wearing Sport Casual Cargo and Zipper Pumps. For the posture, Love's right hand is holding Berry on the waist while Berry's left hand is holding on Love's shoulder. Both of their opposite arms are on their waist. White glow can be seen outlining them. In the background, it is patterned with "Love and Berry" logo that can be seen in the game filled with medium orange. The game's logo has minor changes and is relocated to the top right corner. At the left side of the background, it shows the game's Japanese title and the website link.

This collection receives a major revamped with sparkle gloss being remain unchanged. As usual, the card's type depends on which color. The following possible colors are:

Outside the border, a slight curve arch with a heart (Card's type is inside the heart) is added onto the top left corner. Inside the arch, the color and card's type depends on what category is the card in. As for the outline, it is in darker tone. At the bottom right corner, a tilted heart that was added in 2005 Spring-Summer Collection returns except the outline of the tilted heart is darkened. Everything inside the tilted heart remains the same. A slight bend curve can be seen. Beside the barcode, a thin line that depends on what category the card is in is added. The thick line colored medium pink is added next to the thin line with the card's transliteration inside the thick line. At the right, there's a thick faded medium pink line with "Fashionables Witches Love and Berry" being printed on.

Inside the border, a rendered image of the card is in the middle. Above the rendered image is the card's name, card's number, and card's initial type. Below is the card's description. It also depends on what color the card is in (Except the card's name). In the background, the color is pink with some white gradient mostly covering the middle. A bunch of maple leaves can be seen in the background as well. 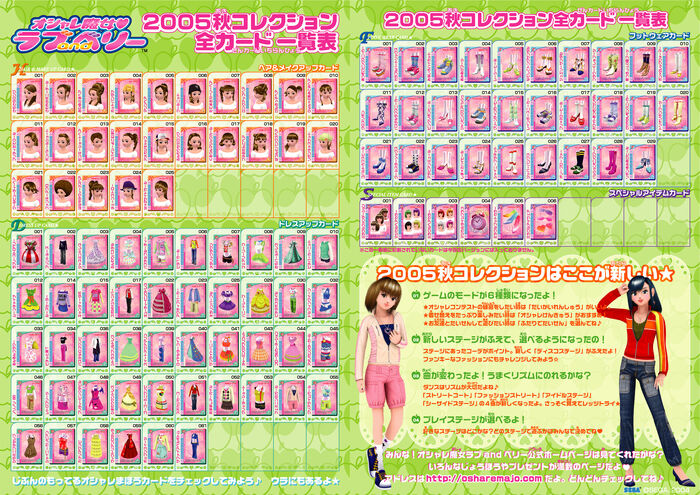 Retrieved from "https://loveandberry.fandom.com/wiki/2005_Autumn_Collection?oldid=12578"
Community content is available under CC-BY-SA unless otherwise noted.