The 2005 Spring-Summer Collection is the 2nd card collection of the Japanese version of Love and Berry. It was released in 1st June 2005 and is the Japanese counterpart of the eventually released Version 2 in the international version.

However, new cards were introduced. Resulting in 3 Hair & Makeup Cards, 6 Dress Up Cards, 4 Footwear Cards and 1 Special Item Card added into the main roster. In total, there are 88 cards in this collection, with two Dress Up Cards being removed.

Like 2004 Autumn-Winter Collection card design, it has the barcode taking up almost the entire side (left on the front, right at the back) of the card at both sides. Except that there are minor changes to it.

The back of the card now shows Love and Berry holding each other (Or hugging). The background is light pink while the left is hot pink, there is a faint white fog in the middle. As usual, they're wearing the same outfit just like in 2004 Autumn-Winter Collection. And the link to the now defunct osharemajo.com

This collection follows the design from 2004 Autumn-Winter Collection as well as the sparkle gloss with additional changes. As usual, the card's type depends on which color. The following possible colors are:

Within the border, most of the outline (Including the pink heart) has been made thinner and re-colored to peach. The card's name and its initial card number beside the pink heart has been made slightly smaller. Transliteration name has been re-located, the color where the transliteration name reside is re-colored to hot pink, and at the bottom right corner, a tilted heart displaying the card's lucky color (There is no change to the lucky color's design) is added. The color of the tilted heart will correspond to the card's type color.

The logo, instead of saying "Osharemajo Love & Berry" , it says "Fashionable Witches Love and Berry".

The white seemingly "fog" from the background within the border is removed, which exposes the whole background color. In the middle, it displays a rendered image of the card. Above it, the card's lucky colors has been replaced with its transliteration name. 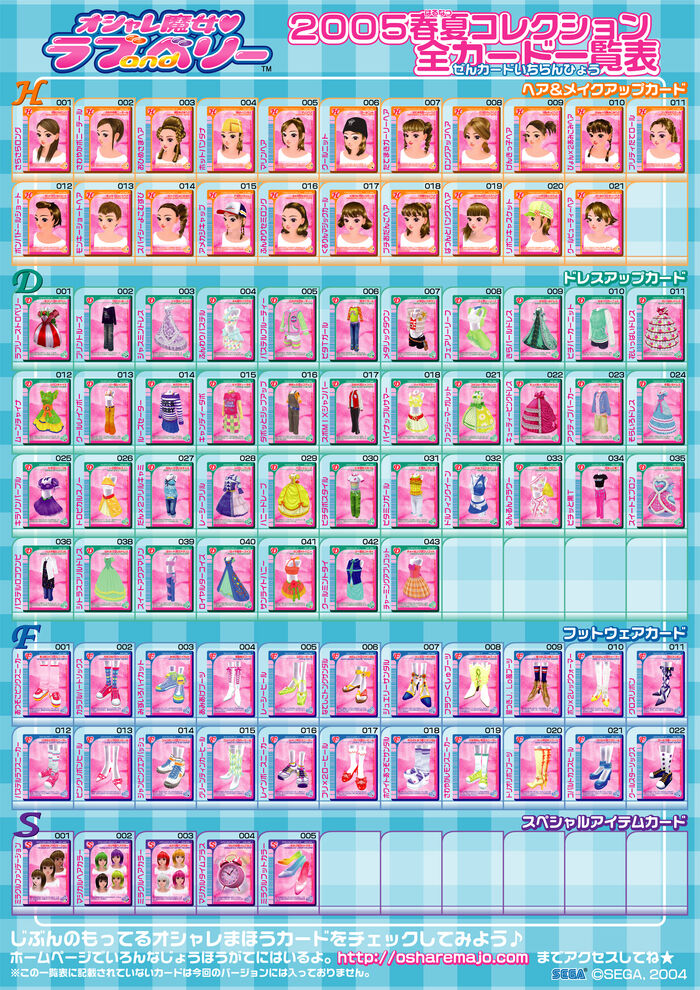 Retrieved from "https://loveandberry.fandom.com/wiki/2005_Spring-Summer_Collection?oldid=12577"
Community content is available under CC-BY-SA unless otherwise noted.