The 2007 Autumn Collection is the twelfth card collection of Oshare Majo Love and Berry. It was released in 12th September 2007, and has no official English counterpart. Aside from adding more cards into the collection, it also introduces a new kind of card, Primp Up Cards, which changes a character's outfit to a complete outfit based on the player characters' preferences, by using current and/or removed cards from the roster. Although minor, it introduces a subcategory: Secret Cards, which applies to cards that will appear in one collection only. However, there are exceptions where the card is reintroduced back into the main roster (e.g. Best Collection due to the card's popularity).

The 2007 Autumn Collection card design has the barcode slightly up higher at the front side of than the back. The back has Berry holding Love's waist while the both raising their lower arms up, where love has a wave like hand gesture while Berry's is closer to her haid and has her fist closed. Love is wearing Flowin' Comet and Strappy Sneakers while Berry is wearing Glitter Road and Stellar Universe. The top left has the Oshare Majo: Love and Berry logo, while the background has pink and white checkers while there are shapes of two spotlights, several apples, and citrus slices. There are also some sparkles and a place to put the card owner's name. A small amount of the left side has Oshare Majo Love and Berry in it and the link to the now defunct osharemajo.com.

The front side is the first among the Japanese versions to have more than one difference (which is the LB Style Brand written behind the clothing item) depending on the LB Style Brand. Aside from that, the card front all use the same template, that has a diagonal line with a lace that has shining material, the clothing item in the middle, the card's English transliteration  below the bottom diagonal line (the transliterated name will shine if the card is specifically for the Seaside Stage, the Idol Stage, or the Ball) along with the accessory that comes when a certain item is worn, the item's charm point, or the make-up that comes with a hairstyle. The background of the charm point area is pink and white checkers and some flowers. There will not be a charm point if the card is a Special Item Card. Said diagonal line will also have the card's description.

If a card is under the Natural brand (example being the Yawaraka Mouton Boots shown above), the card will have a main orange-yellow background that has the word "Love and Berry Natural" diagonally printed and several outlines of flowers and a quilt-like pattern. The shape under the first letter of the type of card will be a leaf.

If a card is under the Lovely brand, the card will have a main pink background. The words "Love and Berry LOVELY" are also diagonally printed along with a lot of branch-like patterns and a crazy pattern of dark and light pink. The shape under the first letter of the type of card will be a heart.

If a card is under the Elegance brand, the card will have a main violet background. It will have the words "Love and Berry Elegance" printed on the background along with prints of chandeliers. The shape under the first letter of the type of card will be a diamond.

If a card is under the Sports brand, the card will have a main white to blue gradient background. There will be a metal-like pattern printed, along with an arrow and several stripes/lines. The shape under the first letter of the type of card will be a star.

If a card is a Special Item Card, it will have a rainbow gradient background (since LB Style Brands don't exist for Special Item Cards) with transparent bubbles on them. Since they can all be used in any stage as one can wish, they all have a shining English transliteration. Instead of a charm point, sihoulettes of Love and Berry can be seen along with the card's Japanese name. The shape under the first letter of the type of card will be the shape of the planet Saturn.

The normal gloss for Fashion Magic Cards aside from the Primp Up Cards have plaid-like pattern with several dashes of lines.

Primp Up Cards, however, will have a drastically different design, but will have the same card back as normal cards. Majo Red Coorde has a pinkish-red background, with the description being at the side of the card printed sideways. The background will have one big heart, along with smaller hearts that blend in with the pinkish-red color. There will be two large circles behind the large photo of Love wearing the coorde and outside of the heart and the smaller photo of Love wearing the coorde. The words "LOVE" will also be behind the circles. There is also a thick, green diagonal line with white outlines that have the card's type and number, Japanese name, and English transliteration in it along with the letter "P", which also has a pinkish-red background and green hearts around it.

Majo Blue Coorde also looks similar to how Majo Red Coorde, but a blue background instead of a pinkish-red one. The circles are now south west instead of the Majo Red Coorde's north west. There are now also stars on top of the circles. The background also has the words "BERRY" on it, and there will also be one large star, one small star, and other smaller stars blending in with the rest of the background. The larger picture of Berry is also on front of the circles and the smaller picture of Berry is inside the circles. The diagonal line is now gold instead of yellow and the "P" symbol is now blue with gold stars.

Primp Up Cards will have a checker-like gloss that will reflect on a circle-like pattern instead of the usual that reflects in only a certain area that is shined upon. 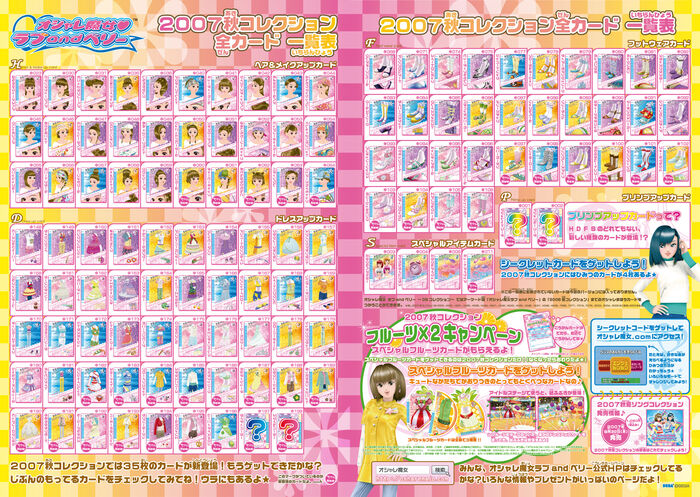 Retrieved from "https://loveandberry.fandom.com/wiki/2007_Autumn_Collection?oldid=23888"
Community content is available under CC-BY-SA unless otherwise noted.