The 2007 Spring Berry Collection is the 10th card collection of the Japanese version of Love and Berry. It was released in 17th April 2007 and is the Japanese counterpart of the eventually released Version 11 in the international version. It can be considered as the second half of 2007 Spring Collection.

Unlike the previous collections, this collection only features Hair & Makeup Cards in Berry's hair color as it's Berry's own theme.

New cards were once again introduced. Resulting in 3 Hair & Makeup Cards, 10 Dress Up Cards, and 7 Footwear Cards added into the main roster, leaving 89 cards (including the Event/Appendix Hannari Komachi) in this collection.

From the 2007 Collections onward, each that represents one of the four seasons are more detailed that matches their collection names to fit the overall theme.

With new cards coming up, Love dons Cherry Sweetheart while Berry dons Lemon-Lime Twist instead. As for the postures, Love's right hand is raised to her chin, covering her neck; Berry's arms bent and her hands are clasped together.

The background itself now follows a starry style with constellations and the background of the barcode on the east is filled with stars.

Instead of being in a cherry blossom style, it now uses stars, representing Berry's affinity charm. The layout is kept simple with just two shooting stars, color corresponding to the card's type, on the top left and bottom right corner. Star and circle pattern can also be seen in the two rainbow-like curves. Both the card's name and the card's category type with the card's number allocated have been shifted up to the right corner. Moreover, the initial letter of the card's category and name is colored to blue. The description itself is shifted near to the barcode and rotated vertically while the transliteration itself is put on path on the bottom rainbow-like curve.

The background is now colored to pink and yellow gradient with a starry style added. The LB Style Square Brand glows as it's a moon.

There are some cards that have minor changes compared to the rest of the cards in this collection. A sign of it is a silver metal-like reflection. Although, it's not known what it's hinting at. 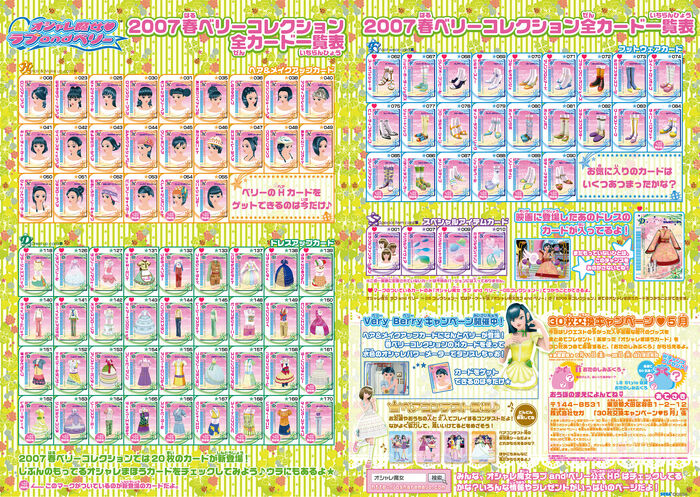 Retrieved from "https://loveandberry.fandom.com/wiki/2007_Spring_Berry_Collection?oldid=12891"
Community content is available under CC-BY-SA unless otherwise noted.