The 2007 Spring Sakura Collection is the 9th card collection of the Japanese version of Love and Berry. It was released in 1st March 2007 and is the Japanese counterpart of the eventually released Version 10 in the international version. It can be considered as the first half of 2007 Spring Collection.

New cards were once again introduced. Resulting in 3 Hair & Makeup Cards, 11 Dress Up Cards, 7 Footwear Cards, and 1 Special Item Card added into the main roster. However, the collection is rebooted, leaving 88 cards in this collection.

From the 2007 Collections onward, each that represents one of the four seasons are more detailed that matches their collection names.

The cherry pink-colored background itself (hence, fitting the theme of the name) has a watermark pattern comprising of an image that are seen in all modes in a diagonal direction. Background of the barcode on the east is filled with cherry blossoms' flower petals in a checked style. Laces, however, are reduced to simple frills.

The background is now colored to cherry pink with a faint gradient and snowflakes are replaced with cherry blossom flowers, whether it is torn or not. Sparkles are left there to help the effect of the sparkling gloss. 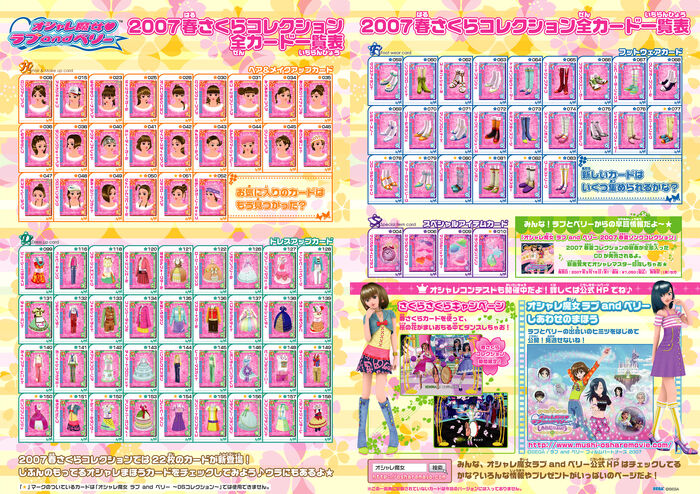 Retrieved from "https://loveandberry.fandom.com/wiki/2007_Spring_Sakura_Collection?oldid=13705"
Community content is available under CC-BY-SA unless otherwise noted.