The 2007 Summer Collection is the 11th card collection of the Japanese version of Love and Berry. It was released in 28th June 2007 and is the Japanese counterpart of the eventually released Version 12 in the international version.

In this collection, it features the four Sparkling Summer Cards, which are all Dress Up cards, that can be considered as Love and Berry's signature outfit for this collection. Scanning one of these cards will change the pink and blue sparkles to flowers that represents the theme of summer.

New cards were once again introduced. Resulting in 4 Hair & Makeup Cards, 11 Dress Up Cards, and 6 Footwear Cards added into the main roster, leaving 89 cards (including the Appendix Melon Sun Visor) in this collection.

From the 2007 Collections onward, each that represents one of the four seasons are more detailed that matches their collection names to fit the overall theme.

As each collections features the two girls showcasing a certain outfit, in this collection, Love wears Seashore Soda while Berry wears Citrus Poche. Due to their lack of hand gestures or arranged movements, it's not possible to know. Although, Love gives a little hint that might suggest she's hunching with her hands on her knees.

The layout itself now goes with an oval that resembles like a mirror, adorned with some hibiscus and leaves in front and a whitewashed pattern behind the back. Half of the mirror lines' color loses a bit of the corresponding color type. The position for the card's name, card's category type with the card's number allocated, the description, and the transliteration used in the 2007 Spring Sakura Collection is reused again with the exception of the transliteration being slightly curved. Despite the corresponding color returning back, the description now follows along.

The background has an ocean reflection-like look with a bunch of mini noticeable stars and the glow of LB Style Square Brand is absent.

Some cards receive a minor change design compared to the rest of the cards in this collection. Signs of the change are a blue metallic-like reflection, a couple of small flowers, and a toucan that is enough to differentiate the card with other cards. 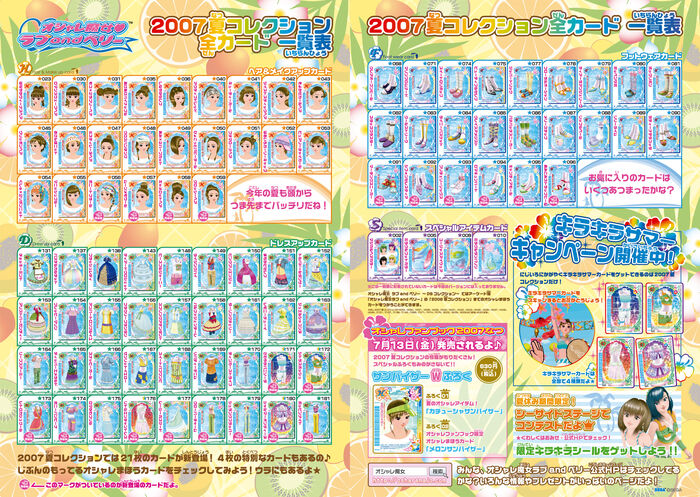 Retrieved from "https://loveandberry.fandom.com/wiki/2007_Summer_Collection?oldid=17460"
Community content is available under CC-BY-SA unless otherwise noted.