Are you looking for the Japanese version of the wiki? Please go to this link!

Welcome to the Love and Berry Wiki! In this wiki, we cover information about the game, from both the International and Japanese versions, DS port and cards, even ones that were never released outside of Japan. 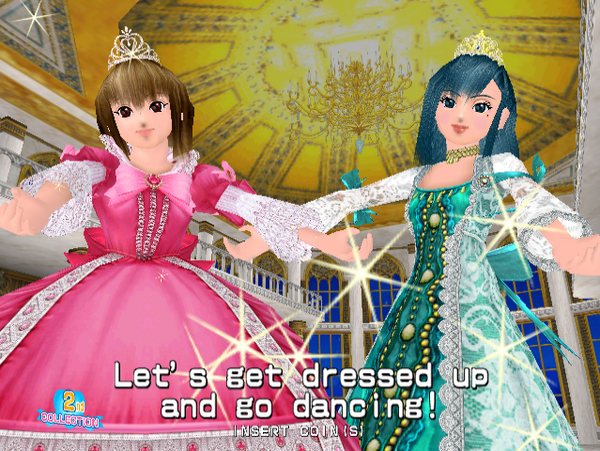 For other minor characters, here.

Information About the Game

Love and Berry: Dress Up and Dance! (Also known as Oshare Majo: Love and Berry in Japan) is an arcade game that utilises trading cards, similar in fashion as Mushiking: The King of Beetles and Dinosaur King. In the year of 2004, it started operation in Japan as Oshare Majo: Love and Berry before it got later localised in overseas under the name Love and Berry: Dress Up and Dance!. In the game, you select a character to play as: Love, Berry, or Miesha (Japan only). One of the two characters that did not get picked will be your rival for you to compete in a fashion showdown. For two player modes, you and your friend, or yourself, will get to play as both Love and Berry (or Miesha).

As to win the game, the players are equipped with Fashion Magic Cards for the purpose of scanning them to produce a combination with the most Dress Up Power that they can get. These Fashion Magic Cards would be categorised into four introduced at the start of operation: Hair & Makeup Cards, Dress Up Cards, Footwear Cards, and Special Item Cards. In the latter collections of 2007, new categories are introduced such as Tops Cards, Bottoms Cards, Accessory Cards, and Primp Up Cards as a card that can transform a character to a full outfit depending on their preferences.

Once the player has decided by simply pressing both left and right buttons together or runs out of time, they are teleported to the selected stage and their chosen character will grade their outfit, with either "Perfect", "Great", "Good", "Fair" and "Bad". The player are met with the songs, to which they have to press the button to the beat of it. The result will determine whether the player gets to proceed to the next round or not.

If you do well, you'll be able to play one more stage. (A chosen stage in Super Easy, Recommended Easy, Easy for Two, Hard for Two or the Special Stage for Super/Kind of Hard.) Aside from the main game, you can scan a dog card in the "Along With Doggy" mode, you can practice for later stages or certain songs in "Contest Practice", or you can check out stage chemistry in "Dress-Up Research". You can also compete against a friend in "2 Player Competition".

While Japan was able to have 17 different collections of cards, overseas editions only had 12 different versions with versions after said 12 versions being rereleases of earlier card with everything being the same except the card back. There are 580+ cards available to collect in the Japanese version and 330+ in the International version. Can you collect them all?

Without them, the wiki would be filled with tons of missing images! A big huge thanks to everyone!

If you see this, your JavaScript might be disabled or DiscordIntegrator plugin isn't working. If the latter, please contact a wiki administrator.

Pretty Pink Devil is a Dress-up Card released on the 2005 Autumn Collection. It was the only main collection card that never got an international release (most likely because of the devil-based theme) and got replaced by a Shogakukan event card, Cutie Red. Read more...

ABCD Everything's Okay! is the song for the Street Court released in the 2005 Autumn-Winter Collection. It is one of the most well-known songs of the game, alongside Daddy's Birthday.

To write a new article, just enter the article title in the box below.

Not sure where to start?

Community content is available under CC-BY-SA unless otherwise noted.