Miesha (Japanese: ミーシャ Mīsha) is one of the playable characters in Rivale Collection & Finale Collection versions of Oshare Majo: Love and Berry.

She made her debut in the Oshare Majo Love and Berry ~DS Collection~ as a rival in story mode. She eventually makes her return in the 2007 Autumn-Winter Collection of Oshare Majo Love and Berry by scanning the Magical Rival card. By the 2008 Summer Collection, she becomes a playable character until the cease of the game's run. She was never mentioned or referenced in the English version.

Little known about her, she was a former student of Fashion Magic Academy but was expelled due to using black fashion magic.

A black witch who holds rivalry in her heart with the fashion witches. She believes it doesn't matter as long as she's able to be fashionable. She can be a little clumsy at times.

Miesha has natural black (which turns into the Lucky Color black) shoulder length hair, black eyes and a fair skin tone (which can be changed via Miracle Foundation), and according to her bio, her main charm points are butterfly items.

It is unknown what her affinity is, but it seems that she likes to wear appealing clothing that captures people's attention. Due to this, it's likely that her affinity leans towards hot and sexy clothing. She also seems to speak in a sarcastic tone.

Her outfit style simply consists of a pink jacket with yellow stripes, a grey camouflage baggy pants with black butterfly design and two ribbons near the mid-calf, and a black cropped top that reveals the tummy. She also has a necklace accessory with a silver ring dangling freely. Her two-colored green and blue high tops, underneath the soles' color are white, are perfectly contrasted with dark purple laces.

Her outfit coordinate has a yellow coat, black top with some buttons unbuttoned, blue denim-like capri pants, and a white belt wrapped around the coat to add to the finishing touch. Her accessory consists of a yellow chain necklace, decorated with sky blue beads and sapphire butterflies. Her footwear is a simple pair of white mid-calf boots, and one belt buckle can be seen on the left and right side.

Her idol stage dress seems to take on the ribboned Cheongsam style decorated with flowers and butterflies in the front and back, and a peek-a-boo hole near the upper chest area serving as the key accent. It featured the colors red and purple, the former in the front and back while the latter on the left and right side, which is then edged with yellow border and a ruffle. Underneath the slit dress is a layered dark purple skirt with black laces. A pair of feathered sleeves held by the purple and yellow straps are also seen.

Her footwear consists of dark leggings and long green boots, which have purple outlines and red ribbons. The soles of the boots are in the color of lime green.

Molti Soupir (Finale Collection)
Add a photo to this gallery

Miesha being summoned by Magical Rival

Miesha in the dress-up portion

Miesha in a cutscene taking place on the Seaside Stage

Promotional material for Magical Rival for the Best Collection

Promotional material for the Best Collection

Promotional material for the Rivale/River Collection with Miesha's playable debut

Promotional material for the Finale Collection

Miesha drawn with a swimsuit

Love, Berry and Miesha as chibis in a Tsuushin blog post

Love, Berry and Miesha as chibis in a Tsuushin blog post

Miesha drawn with a school uniform

Miesha with Love and Berry in a Rivale Collection wallpaper

A wallpaper released to commemorate her birthday 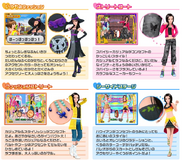 Miesha Emoticons from the osharemajo.com Blog

Add a photo to this gallery

Retrieved from "https://loveandberry.fandom.com/wiki/Miesha?oldid=22928"
Community content is available under CC-BY-SA unless otherwise noted.