The first six cards are the same cards as the first set of Trial Cards. The latter four cards are exclusive to ~DS Collection~, but Magical Decoration can be used in arcades.

While part of the 2006 Winter Collection, they were designed after the DS Collection cards in layout, except with a shiny background. They are, however, standardized with the rest of the cards in Version 9, due to the fact that ~DS Collection~ was never localized.

The cards listed above are also what Love and Berry wear for most of the pre-2007 promotional material since the game's launch in 2004. This was also the last time these outfits were on the roster beginning from the 2004 Autumn-Winter Collection, excluding Best Collection re-releases.

For ￥210, booster packs were released that included three cards each. They are similar in design with the cards included with the game, and can also be used in the arcade version.

There are two versions that exist: Normal or Shiny (may come in different variations)
They are the following:

Story Mode is a visual novel where either Love or Berry will go around with their everyday life. She will go around with the other playable character not chosen, along with meeting certain characters and the boy for each area. After encountering Miesha, the two will have a face-off. Story Mode's difficulty, by default, will always be in Recommended Easy. Even if the player loses against their rival for the dance, they will still be able to proceed with the visual novel components, albeit with a different ending.

Like any other visual novel, you are given a set of questions that will affect the story. While most actions aren't timed, there are certain points where you are only given a 30-second choice, a 15-second choice, and a choice without a time limit. These usually affect the story, along with the character's affinity with the boy, which ranges from bad to perfect, similar to Dress Up Power.

For the first five chapters, the areas are, in order, Street Court, Fashion Street, Disco, Seaside Stage, and Idol Stage. However, Chapters 2 and 3 and Chapters 4 and 5 can have their orders in play switched. If you have one boy with higher affinity compared to the others, your final chapter will be the Ball, and you will dance with him. Love or Berry, depending on who wasn't chosen, will be your rival. If you have all the boys in the same affinity, you will get the Special Stage, to have your final face-off with Miesha.

Replica of the 2006 Autumn-Winter Collection version of Oshare Majo Love and Berry.

A special mode that allows you to make your own designs. The data is then saved into the cartridge, but the only way to be able to use your creations is when you scan the respective type of DS Collection Card. Due to the arcade machine itself lacking any coding for customized cards, these creations cannot be used in the arcade game.

The player can choose four templates, four patterns (each different for each template), and four colors. Every creation only has one lucky color, even if that card is a Dress Up card. Every new save file will have a randomly generated color palette of four colors, and the only way to get items of different colors is by trading with a friend.

Requires two copies of Oshare Majo Love and Berry ~DS Collection~. Exchange designs made with the Card Creator. The player can also receive cards with lucky colors not available in their respective cartridge, as each cartridge only has a random selected palette of four colors. This is only applicable with DS Wireless Play.

There are various things that can be set in this area.

Bonus Mode can be unlocked either if the player gains their first Bonus Point (The first song unlocked will always be ABCD Everything's Okay!). This can be done by beating Kind of Hard or Story Mode for the first time.

The player can unlock more songs and angles by gaining Bonus Points via winning Kind of Hard, finishing Story Mode again, entering codes, or by scanning any card from the 2007 Spring Sakura Collection.

Bonus Mode allows the player to watch Love and Berry sing and dance to a certain song without having to play a rhythm game. There are three different angles, one that shows both of the characters (or just one in the case of the Ball), one that focuses on Love, and another that focuses on Berry. 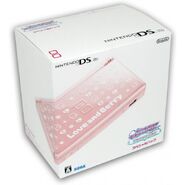 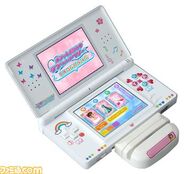 DS Lite decorated with stickers included with the game

DS Collection Wallpaper
Add a photo to this gallery
Retrieved from "https://loveandberry.fandom.com/wiki/Oshare_Majo_Love_and_Berry_~DS_Collection~?oldid=22811"
Community content is available under CC-BY-SA unless otherwise noted.