Version 3 is the third card collection of Love and Berry Dress Up and Dance!. It is the half counterpart of the 2005 Autumn Collection. Other half being Version 4.

This collection was eventually re-released as Version 15 Classic with almost everything being the exact same except the card design. The theme heavily focuses on the new additional stage, Disco (which is available after second collection onwards). Hence, few disco compatible outfits have been added into the roster. 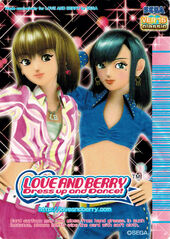 Version 3's background consists of Love and Berry posing side-by-side, with Love's right hand on her hips while her other hand is placed on the thigh and Berry's right hand is behind her head while the other hand is on her hips. For their signature outfits, Love wears Retro Pleats and Berry wears Sapphire Bell Bottoms. The black background is glamored with pink glares and sparkles.

The barcode is on the east, just below the "Ver 3" symbol. It is colored blue with the background being transparent pink.

Version 15's card back is exactly the same, except with the fact that "Ver 3" is now replaced by "Ver 15 Classic."

In Version 15 Classic, it uses a hologram of crystal shards.

This version uses the standard, small dot, gloss used in earlier versions of Love and Berry Dress Up and Dance!. The card is surrounded by a border that is colored depending on the card's type. The following possible colors are:

This version design is not an upgrade to the previous versions and has been modified to a disco motif.

In the center of the card reveals the card's appearance, surrounded by gemmed borders within the starry sparkles in shiny foil near the corner with corresponding colors to its card's type; not excluding the disco ball, card's type and initial, as well as the lucky color in shape of a star with gem outline that are affected as well.

To the east side is a vertical rainbow that reaches all the way from the top to the bottom, which has the card's name of a corresponding color within. Just the edge of the rainbow has the card's description.

The background is covered in shades of pink decorated with sparkles. Not for the last, the barcode is on the west as usual.

The layout is very much similar to the normal version minus the rainbow and a change of background with gradient consisting the lucky colors mixed in. 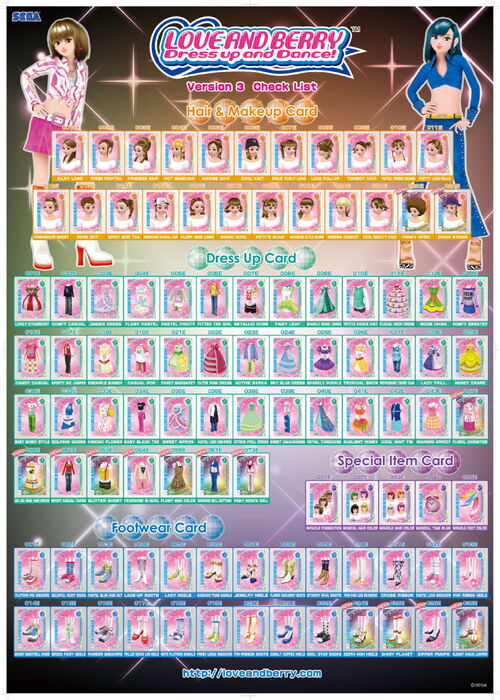 Retrieved from "https://loveandberry.fandom.com/wiki/Version_3?oldid=16673"
Community content is available under CC-BY-SA unless otherwise noted.